The influence that whey proteins can have on the immune system is an area of growing interest and, with more consumers seeking ways to support their immune system, it’s no surprise that the demand for such ingredients are on the rise.

Whey protein is renowned for its muscle building ability, given its unrivalled composition and digestibility characteristics. Think about it – whey protein has all nine essential amino acids, is high in leucine, a great source of branched-chain amino acids, and absorbs quickly, not least due to its high digestibility. It supports strong bodies from a strength perspective (of course, in combination with exercise) and can also assist in weight management goals due to its role in increasing satiety. While whey protein supports these goals, it is more than just muscle building and weight management for your body. The immune system support starts with a healthy, balanced diet, with favorable body weight and composition, and an active lifestyle.

Whey protein is made up of protein fractions, as shown in Figure 1, and each fraction can exert different health benefits. In fact, two key fractions in immune system support are: 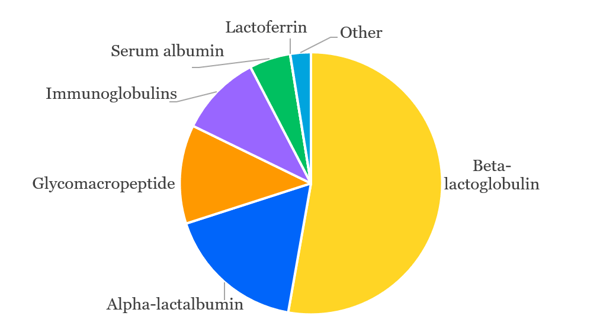 Lactoferrin is a small but important globular glycoprotein found in human, bovine, and other mammalian milk, as well as in many other secretions, such as tears and saliva. As shown in Figure 2, the physiological functions of lactoferrin go far and wide, from anti-fungal, anti-viral and anti-bacterial, to iron-absorption, antioxidant and microbiome modulation. 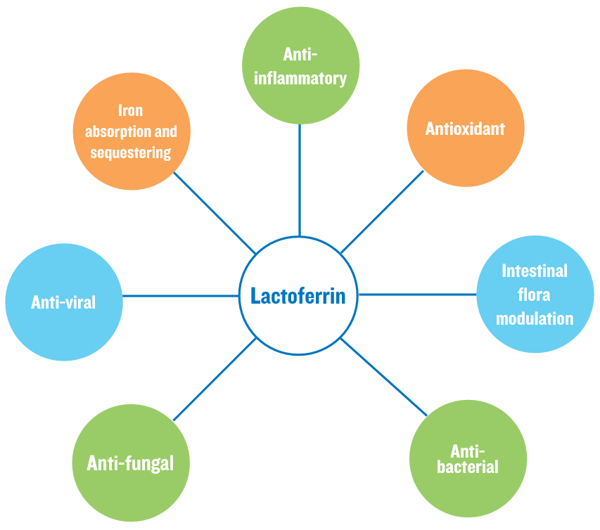 This ability to bind iron may also contribute to lactoferrin’s antimicrobial properties. Lactoferrin has been shown to protect against several pathogens, including E. coli, E. sakazakii, Hepatitis C and rotavirus. One possible explanation for this is that it competes with the bacteria for iron, thus inhibiting its growth. The impact of lactoferrin on gastrointestinal health was demonstrated in one study looking at the influence of 100mg lactoferrin supplementation in children (Egashira et al, 2007). The researchers found significantly lower frequency and duration of vomiting and diarrhea in the supplemented group vs placebo.

Another potential mechanism linked to lactoferrin’s antimicrobial properties is that it binds to the bacteria, therefore stopping it from binding to cells inside the body. Lactoferrin has been shown to prevent microorganisms from adhering to, colonizing and forming a biofilm on host cells (Lönnerdal, 2009). The formation of biofilm is a crucial step in the development and persistence of infection.

Furthermore, lactoferrin has been suggested to have a prebiotic benefit in the large intestine. Upon digestion of lactoferrin, several bioactive peptides are released, which have been shown to enhance the growth of bifidobacterial (Singh et al, 2002). This may be another reason why this unique whey protein fraction exerts an immunomodulatory benefit, as the gut microbiome is known to influence immune function.

Immunoglobulins (Ig) are antibodies found in both human and bovine milk that have been shown to have immunomodulatory, antimicrobial and anti-inflammatory effects. In cow’s milk, the main type of immunoglobulins is IgG (followed by IgA), and these have been studied for decades in order to better understand their immune benefits and the mechanisms behind them. Not least, studies have shown that IgG supports the immune system through its ability to bind to pathogenic bacteria, viruses and allergens.

Colostrum is a rich source of IgG’s and has often been used in studies as the source of these immune-supporting compounds. Clinical trials in humans have found reduced duration and severity of diarrhea in both infants and children, as well as a potential reduced incidence rate of infection (Davidson et al,1989; Ebina et al, 1983; Mitra et al 1995; Saad et al. 2016).

In adults, IgG supplementation has been found in a small number of studies to be beneficial on the incidence and severity of upper respiratory tract infection (URTI). For example, Jones et al. (2014) supplemented adults with either colostrum protein concentrate (CPC) or a calorie/protein placebo every day for 10 weeks. They found a significantly lower proportion of days with URTI in the colostrum group compared to the placebo group.

Although clinical trials behind IgG have varied in terms of dosage, target group, endpoints and experimental design, there are promising results from several studies, some of which have already been mentioned.