A PRIMER ON MILK PROTEINS

While both WPC and SMP originate from whole milk, they are derived through very different forms of milk processing. Dried WPC is a co-product of the cheesemaking process – liquid whey is separated from curds during the cheesemaking process and subjected to ultrafiltration and drying, resulting in various whey protein concentrates containing 34-80% crude protein. Dried SMP, in contrast, results from the separation of cream from milk for butter manufacturing – the resulting skim milk is dried to produce a 34% crude protein ingredient. A key difference among these ingredients is that SMP contains all proteins found in milk, whereas WPC does not contain casein because casein is utilized in the cheesemaking process. As a result, the amino acid profiles of whey protein and skim milk protein differ slightly.

Historically, skim milk was a prime candidate for inclusion in CMR – it was readily available and inexpensive compared to whole milk. More recently, there has been an emergence of skim milk protein use in human and sports nutrition, which has driven the cost of SMP higher and precluded use of much SMP in modern CMR in the United States. In contrast, whey was long considered a waste product with little to no value. As soon as technology allowed for efficient collection and use of whey proteins, milk replacer manufacturers were quick to adopt WPCs in CMR, and WPC is now one of the most commonly used ingredients in CMR due to its excellent nutritional value, high digestibility, and relatively low cost. Heinrichs et al. (1995) surveyed milk replacer use in the United States and reported that approximately 90% of CMRs sampled did not clot in the presence of rennet, indicating little to no casein-containing ingredient inclusion. Another 8% of CMRs sampled formed only a soft clot, indicating 5% of less of the protein in the CMR being derived from casein-containing ingredients. Only 2% of sampled CMRs formed firm clots in the presence of rennet, suggesting very little usage of casein-based ingredients such as SMP in most CMRs.

Several studies have evaluated nutrient digestibility and calf performance when feeding CMR containing WPC and/or SMP. Terosky et al. (1997) fed calves CMRs containing 0, 33, 66, or 100% of protein from either WPC or SMP through 8 weeks of age and measured calf performance and nutrient digestibility (Table 1). The authors reported no difference in bodyweight gain, average daily gain (ADG), dry matter intake (DMI) or feed efficiency with increasing WPC inclusion. Apparent digestibility also did not differ across treatments. There was also no difference in number of scour days per calf between treatments. 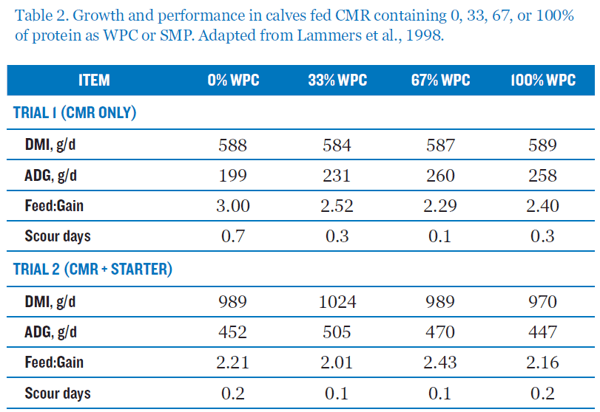 A more recent study by Marsh and Boyd (2011) reported no difference in weaning weight, 12 week weight, coat bloom score, ADG, DMI, or feed efficiency when Holstein bull calves were fed CMR containing protein from either SMP or WPC. Finally, Petit et al. (1988) sought to determine if clotting ability of CMR affected nutrient digestibility. Calves were fed either a control CMR containing SMP, or the control CMR with added oxalate, an anti-clotting factor that does not denature milk proteins. As shown in Table 3, there was no difference in dry matter, protein, or fat digestibility when calves were fed identical CMR that clotted or did not clot, disproving the notion that CMR quality was linked to ability of CMR to form a clot in the abomasum.

Taken as a whole, these data suggest that WPC provides similar digestibility and calf performance to SMP, and that ability of protein to clot in the abomasum is not indicative of nutrient digestibility.

While casein-containing ingredients such as skim milk were first on the scene in CMR formulation due to low cost and high availability, they have all but been replaced with more cost-effective whey based protein sources such as WPC. Despite differences in ability of these protein sources to form clots in the abomasum, substituting WPC for SMP has little to no impact on calf performance – nutrient digestibility, intake, calf growth, and feed efficiency are maintained. Whey-based protein sources such as WPC are a cost-effective, ideal ingredient for inclusion in CMR.