HIGH PURITY FAT SUPPLEMENTS AND THEIR IMPACT ON DIGESTIBILITY

Commercial fat supplements for dairy cows containing varying ratios of palmitic (PA; C16:0), stearic (SA; C18:0), and oleic acids (OA; C18:1) are common in modern lactating dairy rations. Some commercial supplements contain a blend of multiple fatty acids (e.g. PA + OA, PA + SA), whereas other supplements may be highly enriched in just a single fatty acid (FA). The profile of a supplement largely impacts FA digestibility. Recent research reports that supplemental fats that are highly enriched (>90%) in either PA or SA have very low digestibility compared to supplements that are of moderate (~80-85%) or low enrichment (<60% of a particular FA). When choosing a supplemental fat feeding strategy, FA profile should be taken into account in order to maintain adequate digestibility and thereby maximize return on investment.

The market is full of name-brand and generic supplemental fat options with a wide range of FA profiles. Common options include prilled fats (i.e. palmitic acid prills, Energy Booster 100™, etc.), calcium salts of palm FA distillate, tallow, and many others. Both PA and SA are saturated FA, meaning that the hydrocarbon chain on the FA does not have any double bonds (hence the “0” in C16:0 and C18:0), whereas unsaturated fats such as OA have one or more double bond. Prilled fat supplements sold in the dairy industry are available with a large variety of FA profiles, particularly in regard to PA and SA content. Some fat supplements are highly enriched in a single FA (>90%), some are moderately enriched in a single FA (~80-85%), and others are blended fats with low enrichment typically containing 60% or less of any one FA and may have two or three featured in their profile. 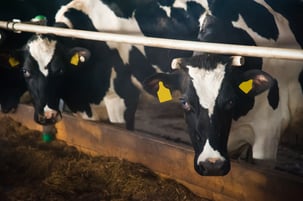 For supplemental fat to be available for use by the cow, it must be hydrolyzed into free FA, emulsified, and absorbed in the small intestine. Emulsification is a key step, as lipids are incorporated into micelle structures and then absorbed through the lining of the small intestine. If lipids cannot be emulsified, they cannot be absorbed and therefore cannot be utilized by the dairy cow for maintenance, growth, lactation, or reproduction. It is apparent that blending FA together in a prilled fat improves FA digestibility compared to feeding a highly enriched (>90%) PA or SA supplement.

Saturated FA are capable of forming crystalline structures, particularly when in purified form. These lipids have a polar head with a nonpolar hydrocarbon chain, and the configuration of these molecules allows them to stack upon each other to form rigid crystalline structures similar to a stack of uniform bricks or logs. When a different FA is incorporated even at modest levels, the structures formed are not as large or rigid. Unsaturated FA such as OA, which have bent hydrocarbon chains, can greatly reduce the size and rigidity of the crystalline structures. Where a high purity PA or SA supplement could be compared to a uniform stack of bricks or logs, a supplement containing multiple different saturated and unsaturated FA is analogous to a mixed pile of bricks, logs, and hockey sticks – no matter how hard you try, it cannot be stacked well. A recent publication by Shepardson et al. (2020) found that fat supplements that were >95% PA or SA had much higher melting temperature and enthalpy values (energy required to melt a sample) than supplements that had inclusion of a second FA. Even just ~4% OA added in to a 93% PA supplement altered the physical characteristics of the supplement by lowering the melting temperature and enthalpy values. This suggests that the physical properties of highly enriched FA supplements may be more difficult to emulsify in the small intestine due to their rigid crystalline structures compared to supplements that are more moderately enriched, but more research is needed in this area.

There are many fat supplements for lactating dairy cattle on the market based on varying contents of PA, SA, and OA. Fat supplements that are >90% pure in either PA or SA have poor digestibility compared to those of more moderate enrichment (~80-85%). This may be due, in part, to the physical properties of saturated FA, as they form secondary crystalline structures in high purity that result in increased melting temperature and enthalpy values compared to blends of FA. Feeding fat supplements that are of moderate enrichment or blends of FA may be helpful in improving FA digestibility in lactating dairy cows.