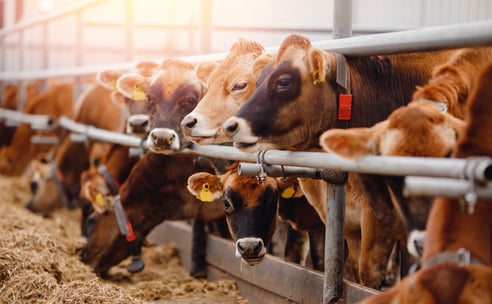 Heat stress is a problem dairy cows experience every summer in almost every part of the continental U.S. It jeopardizes the health, welfare, and production of almost every cow on the farm and decreases farm profitability. 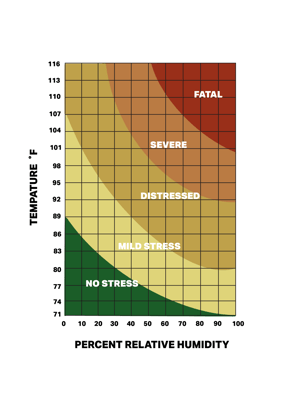 Both the early lactation transition cow (not under heat stress) and the heat stressed cow at any stage of lactation are in negative energy balance and both lose body weight. The transition cow is more flexible in assimilating nutrients for milk production through metabolic changes that reduce insulin production allowing lipids to be mobilized from adipose tissue, non- esterified fatty acids (NEFA) and ketones to be used for milk production. In contrast, the heat stressed (HS) cow increases insulin production inhibiting mobilization of adipose tissue to meet the increased energy demand to dissipate excess body heat and utilizes protein for energy instead of fat (Wheelock et al., 2010). The difference between HS cows and pair fed thermo-neutral cows (PF) in NEFA and plasma urea nitrogen (PUN) concentrations is illustrated in Figure 1.

The PF cows increase NEFA after an rBST injection to create a negative energy balance, whereas the HS cows showed minimal increase in NEFA in response to an increased energy demand for heat dissipation. The increase in PUN in HS cows and the lack of an increase in PF cows, Figure 2, indicates there is a metabolic insult to HS cows that results in the rapid mobilization of body tissue protein as an energy source. In addition, a decreased protein intake concomitant with the lower DMI intake exacerbates the metabolism of tissue proteins. For HS cows, the majority of body weight loss comes from the loss of water, fill, and muscle mass and not fat reserves (Baumgard, 2014) compared to the early lactation which is mobilizing adipose tissue for energy.

Both early lactation and HS cows benefit from adding extra energy into the diet with Energy Booster. Wang et al. (2010) added 0, 1.5 or 3% Energy Booster to the diet of mid-lactation cows that were heat stressed (72 to 84 THI) over a 10 week period. The addition of Energy Booster to the diet lowered rectal temperatures of cows a full 1° F (103.6 to 102.6° F) during the hottest part of the day. Cows fed 3% added Energy Booster had the highest solids corrected milk production during the heat stress period at 64.1 lb./day compared to 62.6 lb/day for cows fed 1.5% and 56.0 lb/day for cows fed 0%. The rumen inertness, saturated fatty acid composition, and high digestibility of Energy Booster 100 make it the ideal fat to supplement in the early lactation period for minimizing body weight loss and increasing milk production. In addition, Energy Booster has been shown in several studies to not decrease DMI, an important factor for both early lactation and heat stressed cows. Heat stressed cows can utilize highly digestible fatty acids from dietary sources for energy; they just cannot mobilize fat from adipose tissue for energy. Also, fat is a low heat increment feed generating no increase in body temperature during digestion. Huber et al. (1996) suggested increasing crude protein concentration in the diet up to an extra 3% during heat stress might be warranted. The extra protein in the diet not only can help reduce muscle tissue depletion, but also helps promote water intake. At least half of the extra protein fed should be from a good rumen bypass protein source. Check closely with your nutrition expert regarding this.

The macro minerals sodium, chloride and potassium should not be overlooked for their effect on helping cows cope with heat stress. A high positive DCAD level should be maintained in the diet during the hot summer months and particularly through the feeding of extra potassium (K). Potassium is the primary regulator of water secretion from the bovine sweat gland and is secreted at high levels in milk; nearly 1/3 of their total daily requirement is secreted in milk. New recommendations (Baumgard and Rhoads, 2007) call for 1.4-1.6% K in diets for lactating cows during summer months. A DCAD level of 25-50 has been shown in recent research trials to be beneficial in improving milk yield and milk fat test. Increased K may have significant effects on ruminal pH during heat stress if added in the form of K2CO3. The CO3- ion is a much stronger base than HCO3- ion and will increase ruminal pH to a greater extent. This will help buffer the rumen from acid build up as a result of irregular feed consumption. Look for exciting developments regarding K and Energy Booster in the near future, what a combination! That leads us to the strategies dairymen and consultants can employ to reduce the negative effects of heat stress.

3. Use misters and sprinklers to cool cows during the heat of the day

6. Increase protein concentration up to 3% higher than normal but check degradable protein levels

Baumgard. 2010. Effects of heat stress on energetic metabolism in lactating