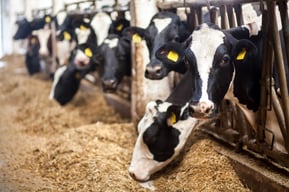 WHAT ARE DE NOVO FATTY ACIDS?

Fatty acids in milk are derived from two sources: de novo FA synthesis from precursors in the mammary gland and preformed FA, which are extracted from plasma and originate either in feedstuffs or from the mobilization of adipose tissue. In the rumen, fermentation of fiber and starch leads to the production of short-chain FA including acetate (2-carbon FA) and butyrate (4-carbon FA). These short-chain FA are the building blocks of de novo FA. The synthesis of de novo FA in the mammary gland begins with the conversion of acetate to acetyl CoA, which is further converted to malonyl CoA by the enzyme acetyl CoA carboxylase. Starting with the malonyl CoA base, the mammary gland can elongate the new FA by 2-carbon acetyl CoA molecules. Butyrate (in the form of beta-hydroxybutyrate) can also be used as the initial 4-carbon base for de novo FA synthesis but cannot be used for further FA elongation. The maximum length of de novo synthesized FA is 16 carbons. Any FA greater than 16 carbons in length most likely originated from a preformed source (i.e. feed or adipose tissue). Not all de novo FA reach 16 carbons and many are 6 to 14 carbons in length. Since 16 carbon FA can originate from either de novo synthesis or from feed and adipose tissue, these are often referred to as “mixed source FA”.

WHY DO I WANT HIGH DE NOVO FATTY ACID CONCENTRATION?

Milk fat is a combination of both de novo and preformed FA. Preformed FA, those containing 18 or more carbons, come almost exclusively from the diet or body reserves (i.e. adipose tissue mobilization during negative energy balance). Fatty acids from the diet are utilized within the body for more than just milk fat synthesis. These FA are used for biological processes, body condition maintenance, and energy for lactation. Feedstuffs, such as forages, contain fairly low (<5%) fat content, but nutritionists can increase fat and energy in the ration by including ingredients such as oilseeds and high-fat byproducts that contain higher lipid levels. These ingredients are high in unsaturated fat and their inclusion needs to be limited because excessive unsaturated FA can be toxic to rumen microbes and lead to poor rumen health. Feeding a mostly saturated FA supplemental fat is a great way to increase energy without compromising rumen function, but these ingredients are often expensive. Additionally, cows do not have exceptional ability to emulsify and absorb dietary FA so most rations do not exceed 6-7% total FA. Given that de novo FA are derived primarily from the fermentation of fiber in the rumen, increasing milk fat from de novo synthesis is one of the best and most economical ways to improve milk fat yield. Higher de novo FA levels have also been associated with a higher overall fat test (Woolpert et al., 2017; Matamoros et al., 2020).

There are many ways to improve milk de novo FA levels on commercial dairy herds. A recent publication by Woolpert et al. (2017) compared the management practices of herds that had high (3.96% butterfat) and low (3.75% butterfat) bulk tank fat concentration (Table 1). De novo FA content in milk was greater in herds with high butterfat (0.92%) than in herds with low butterfat (0.81%). Likewise, mixed (16 + 17 carbon, as defined by the authors) FA content in milk was greater in the high-fat test herds (1.53%) than in low-fat test herds (1.41%). These herds did not differ in herd size or milk yield per cow per day. Compared with low de novo herds, herds with greater de novo FA content tended to be more likely to deliver feed to cows twice per day as opposed to once per day (Table 2). Moreover, 65% of herds with greater de novo FA content had stocking density <110% while only 21% of herds with low de novo FA content were below this metric. The high de novo FA herds were also almost six times as likely to have at least 46cm (~18 inches) of bunk space per cow. Interestingly, 77% of lower de novo FA herds pushed up feed more than 5x per day, compared to only 30% of the herds with higher de novo FA content. Pushing up feed consistently throughout the day is widely accepted throughout the dairy industry as good practice for reducing feed sorting and improving DMI. 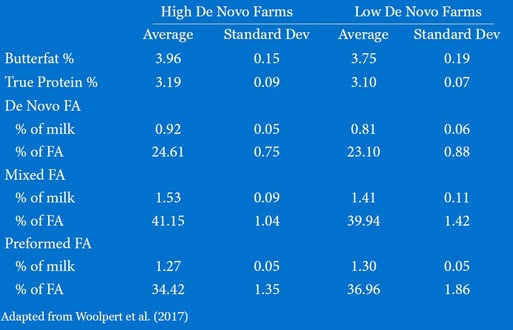 Since de novo FA are derived from acetate and butyrate that result from ruminal fermentation, higher de novo FA is associated with better overall rumen function and health. Woolpert et al. (2017) found that farms with greater milk de novo FA concentrations had more physically effective fiber in their rations and longer average particle size of the as-fed TMR. Physical fiber is one way to improve rumination, which helps buffer the rumen and reduces the incidence of acidosis. Acidosis is a key risk factor that can lead to decreased milk fat production.

Low milk fat syndrome, also referred to as milk fat depression, has been described throughout literature as a significant reduction in milk fat concentration and yield with minimal impacts on other component measures or milk yield. Milk fat depression can be caused by two major factors: rations with low levels of fiber paired with large amounts of rapidly fermentable carbohydrates or large amounts of ruminally available unsaturated FA, particularly polyunsaturated FA (Bauman and Griinari, 2003). The major known cause for milk fat depression is the synthesis of the trans-10, cis-12 conjugated linoleic acid (CLA) isomer from incomplete biohydrogenation of C18:2 FA in the rumen. In a study by Harvatine and Bauman (2011), milk fat depression was induced in dairy cattle by ruminally infusing trans-10, cis-12 CLA. All three categories of FA (de novo, mixed, and performed) were decreased, but de novo FA content was reduced to a greater extent than mixed or preformed FA. Both high levels of unsaturated FA in the ration and high fermentable carbohydrates can lead to the formation of trans-10, cis-12 CLA, and therefore reduce overall milk fat yield in dairy cows. A recent meta-analysis by Matamoros et al. (2020) found that increased de novo FA content was associated with higher milk fat concentration, while trans-10 C18:1 FA (associated with the production of trans-10, cis-12 CLA in the rumen) was negatively associated with milk fat concentration. Although a lack of supply of acetate from rumen fermentation has not been associated with very low milk fat, a recent ruminal acetate infusion study by Urrutia et al. (2017) found that increasing acetate supply up to 10 mol (600g) per cow per day increased both milk fat concentration and yield, but further confirmatory research and economic analysis is necessary.

Improving de novo FA synthesis is one method to increase overall milk fat concentration in lactating dairy cows. There are many management strategies to help improve milk de novo FA synthesis, including delivering fresh feed twice per day instead of once, consistent feed pushups, good physically effective fiber, and at least 46cm (~18 inches) of bunk space per cow. Nutritionally, maintaining fiber content while being mindful of unsaturated fat and rapidly fermentable carbohydrate levels to avoid the production of trans-10, cis-12 CLA in the rumen is also key. Overall, improving rumen health is a great strategy to increase de novo FA content in milk. Farms that can implement these strategies have the opportunity to improve milk fat production and profitability.