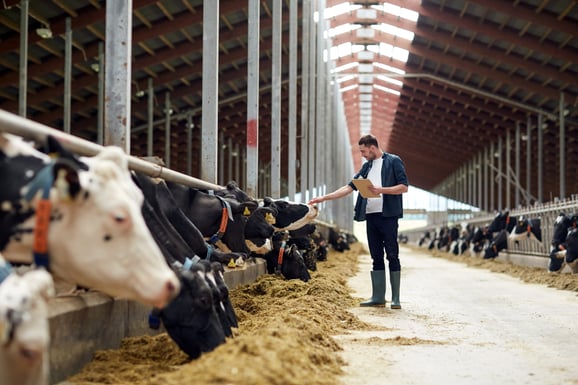 Feeding rumen-protected bypass methionine (RP-Met) in pre-fresh and lactating cow rations is common in the dairy industry. Methionine is considered one of the first two limiting amino acids in modern diets, along with lysine. There is considerable literature on the effects of feeding RP-Met on milk and component production, especially that of milk protein. Many factors impact what effect RP-Met will have on lactating cows, including nutrient makeup of the diet, production level, and management. Rumen-protected amino acid products are typically expensive ingredients and nutrition consultants and dairy managers should consider what response they would need to achieve in order to have a positive return on investment (ROI). Feeding RP-Met to transition and early/mid lactation cows may prove to be a positive investment regardless of milk and component pricing. This article will focus on the benefits of feeding RP-Met to transition cows as well as evaluating these products for lactating cows in general.

The onset of lactation brings large demands for protein and energy, and management and nutrition strategies focusing on transition cows are well-researched topics. Rumen-protected methionine and rumen-protected choline (RP-Chol) products that are often fed to transition cows. These nutrients are involved in different biological pathways but both have a variety of benefits. The major reason for feeding RP-Chol in transition diets is because it is a precursor for phosphatidylcholine, which is needed for the export of fat from the liver, whereas methionine is biologically useful to cows throughout lactation. Both of these products potentially have their places in transition cow programs. This article will focus on RP-Met.

The transition period is a critical time for dairy cow health. Although RP-Chol can be a great tool for transition cows, many farms do not have a separate pen for their fresh cows, and RP-Choline does not likely have much biological or economic return after the transition period. Feeding RP-Met can have a significant impact on milk and component production for cows in many stages of lactation. For every pound of milk at peak, cows may increase production by 250 lbs. over the course of their lactation and feeding RP-Met can increase milk and component production for fresh and high-producing cows.

As previously stated, RP-Met is commonly fed to cows of all lactation stages. A meta-analysis of feeding different sources of RP-Met was published by Zanton et al. (2014). Briefly, the impact on DMI and milk production when feeding RP-Met was variable, with some studies reporting slight increases and others small decreases. Authors showed an average of 0.07-0.08% milk protein concentration increase when feeding RP-Met, and milk fat concentration had a numerical increase as well. Increases in milk protein and fat yield showed a lot of variation but overall had positive numerical impact. The data on health events and somatic cell count observed while supplementing RP-Met are inconsistent.

Evaluating RP-Met supplementation is often dependent on many factors including stage of lactation, production level, and nutrient makeup of the diet. Energy-deficient diets may be limited in responses to RP-Met supplementation. Finally, there is a growing body of research showing the importance of amino acids other than methionine and lysine. Research regarding the importance of histidine, leucine, and isoleucine is ongoing.

Feeding RP-Met can be a great tool to increase milk protein concentration and yield in cows of all stages of lactation for farms of all sizes. Supplementing RP-Met to transition cows can improve milk and component yield for cows in the first month of lactation. Given the large increase in production from fresh cows, supplementing RP-Met to these groups may be warranted regardless of milk and component prices. Nutrition consultants should rely on ROI calculations when supplementing RP-Met in non-transition lactating cow diets by evaluating the milk and component response. Proper amino acid balance and adequate energy levels have an impact on the response that RP-Met delivers. Finally, there are many RP-Met products on the market, and farms and consultants should be aware of costs, availability, and quality of the products they are selecting.

Table 1. Overall intake and production responses when supplementing cows with rumen-protected bypass methionine in the pre- and post-fresh periods.

4ECM / DMI is used as a proxy for feed efficiency