High-yielding dairy cows are typically in a state of negative energy balance (NEBAL) during early lactation period because the amount of energy required for the maintenance of body tissue functions and milk production exceed what the cows can consume. Mobilization of body energy reserves during the early lactation enables the cow to close the gap between the energy intake and its loss through the milk production. Since the mobilization of energy reserves have a considerable influence upon the productivity, health, and reproduction of dairy cows, the monitorization of optimal management of energy reserves is needed. Indicators used by consulting nutritionists, which relate to dairy cows’ metabolic processes, are body condition score (BCS) and live weight (LW). Monitoring NEBAL in dairy herds is done by observing changes in BCS. Greater NEBAL/BCS loss during the first 30 days postpartum delays first ovulation (Butler and Smith 1989). 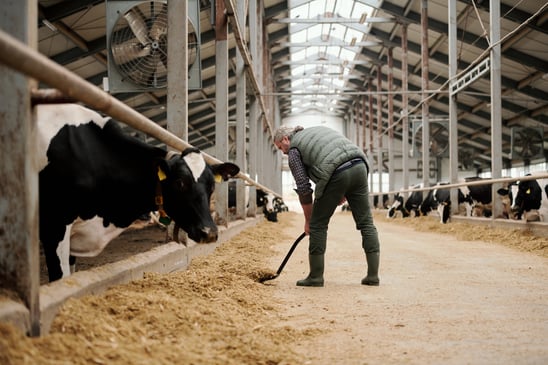 Grummer and Rastani (2003) reviewed the literature regarding “ when should lactating cows reach positive energy balance (EB)”. Their findings revealed that the correlation between peak milk yield (r=0.24, P=0.16) or days to peak milk yield (r=0.23, P=0.17) and time to reach positive EB was extremely low, indicating that some other factor besides energy output was responsible for variability in the length of time it took to reach positive EB. Energy density of the diets was reported or could be estimated for 45 of the 52 treatments; therefore, they examined the relationship between energy density of the diet and days to positive EB. In order to determine what other factors are affect the time to reach EB, they examined individual cow data from a research trial, Minor et al. 1998. They calculated weekly means for daily Net Energy Intake (NEI), FCM yield, and EB for 24 primiparous and 49 multiparous cows from 2 through 21 wk postpartum. The correlations for these parameters are shown in Table 1.

Table 1. Correlation coefficients between energy balance and FCM or NEI from 73 lactating cows and heifers from 2 through 21 wk postpartum. (Adapted from Grummer and Rastani 2003)

It is clear from data in Table 1 that EB is more closely related to NEI than energy output as mea- sured by FCM. McGuire et al. 2002 in a similar trial detected a highly significant correlation between EB and DMI (r=0.75, P<0.0001). It is evident that early lactation demands for energy cannot be met due to inadequate NEI, thus the cow’s metabolism and hormonal control liberates body condition and adipose tissue to meet the demand to close the gap on NEBAL. The increasing NEBAL leads to loss of body weight and reduced BCS scores. The relationship between diet energy density and days to positive EB is illustrated in Figure 1.

Figure 1. The relationship between energy density of the diet fed and time to reach positive energy balance (r=–0.57, P<0.0001). Each point represents the response of a group of cows receiving a treatment reported in the scientific literature. (Adapted from Grummer and Rastani 2003). 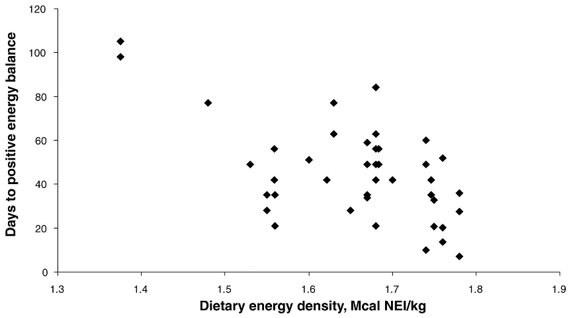 The emphasis becomes one of improved energy intake via improved DMI and NEI by increasing energy density of the ration through increased grain content or by the addition of fat. There are limitations to both remedies, since increasing energy density by increasing grain can lead to acidosis, milk fat depression, depression in DMI, and other metabolic disorders. Adding fat does increase energy density, but feeding too much fat or fat products that contain the wrong types of fatty acids can lead to depression in DMI and milk fat production if excess polyunsaturated fats are included in the fat product. The bypass fat product should not affect rumen function, should increase milk yield and components, should promote better BCS and reproduction, and not depress DMI. These fat products should be high in stearic and palmitic acids with around 10% oleic acid. Products that do not contain sufficient stearic acid are known to reduce DMI.