THE IMPORTANCE OF CHOLINE TO DAIRY COWS

In mammals, choline is required for synthesis of phosphatidylcholine and acetylcholine – two important phospholipids that are key to numerous functions in the body. While choline may not be considered an essential nutrient in ruminants due to the ability of the cow to synthesize it, research suggests that increased absorbed choline supports cow health, production, and metabolism. Intestinal flow of choline supplies less than 30% of the choline requirement of the cow, meaning the remainder must be synthesized in the cow or supplemented in an absorbable form.

Dietary choline in most feedstuffs is highly rumen degradable – around 85-95% of choline in feedstuffs disappears in the rumen, meaning very little dietary choline is available for absorption. As a result, supplemental choline must be provided in a rumen-protected form. Rumen-protected choline (RPC) supports liver function in transition cows by increasing export of triglycerides, preventing fatty liver and ketosis. Supplementing RPC helps cows utilize fatty acids from adipose tissue that are mobilized during negative energy balance in early lactation. Rumen-protected choline increases dry matter intake around calving, supporting milk and component production and a quicker return to positive energy balance. Cows are most deficient in choline around calving, when dry matter intake is decreased and choline requirement is substantial.

An ideal RPC supplement will possess both a high degree of rumen protection and a high degree of intestinal digestibility, resulting in optimal bioavailability. Furthermore, an ideal RPC supplement must maintain this optimal bioavailability from the time of manufacture through packaging, transportation, blending at the feed mill, delivery to the farm, and in the feed bunk.

For this study, 129 kg of RPC was delivered to a commercial feed mill in MN, and added to 1,361 kg of grain/mineral mixture (RPC-MIX), mixed for 3 min in a ribbon mixer and stored in a vertical bin at the mill. The next day RPC-MIX was transferred to an auger truck, delivered to a commercial dairy farm in IA and stored in a vertical bin. RPC-MIX was removed from the bin daily and mixed into a TMR for feeding.

Duplicate samples of RPC were collected before mixing at the mill (RPC-CON), after mixing with grain/mineral and before storage in the mill (RPC-MIX), and at the commercial dairy farm at the feed bunk after mixing into a TMR with forages and other concentrates (RPC-TMR).

Durability was determined by testing crude protein (CP) in rumen undegradable protein (RUP) and intestinal digestibility (ID). RPC-MIX and RPC-TMR samples were sieved for isolation and collection of RPC. For RUP estimation, samples were incubated in the rumen of 2 cannulated mid lactating cows fed a typical midwestern diet for 16 h and reported as % of undigested CP. Intestinal Digestibility (% of CP) of RPC was estimated using the In vitro intestinal digestibility assay for ruminant feeds. Means compared using Student’s t-test with significance declared at P < 0.05. 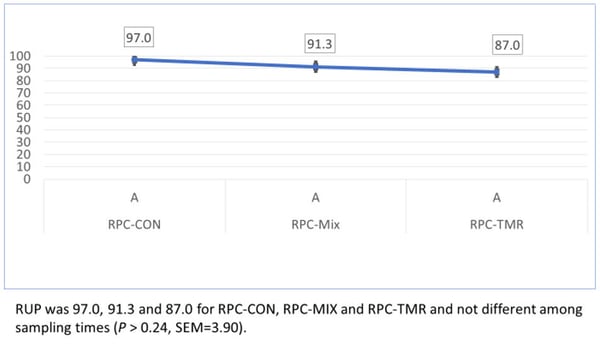 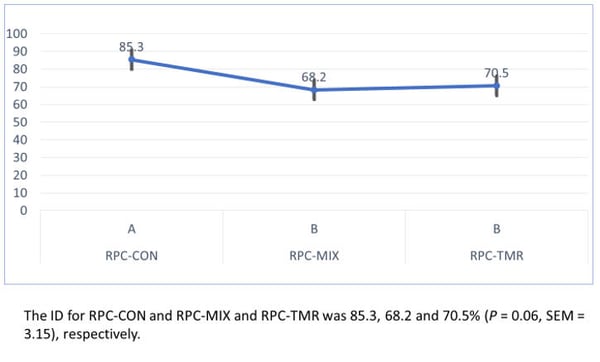 VitalChol DX™ has a high initial durability as shown by the high RUP and ID of the RPC-CON treatment.  Handling and mixing at a commercial feed mill had no effect on RUP, but tended to decrease ID compared with RPC-CON. Durability of RPC was not affected by storage, handling, and mixing on a commercial dairy farm. The data indicate a saturated fatty acid coating can be very effective in protecting choline against rumen degradation and achieving good intestinal digestibility.